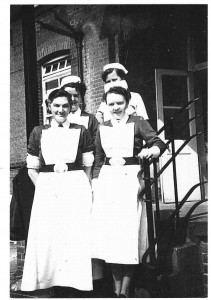 THE HISTORY OF St LUKE’S HOSPITAL

Background….
In 1838, a workhouse was built on the outskirts of Guildford, in accordance with the provisions of the 1834 Poor Law Amendment Act. Its purpose was to house 300 people, the destitute, ill and infirm from 21 parishes. 10 infirmary beds were allocated for the sick – which proved to be totally inadequate.

On 9th February 1856 the Poor Law Board Inspection of the Workhouse reported that the infirmary was overcrowded by 30%, the ventilation was “most imperfect “, and declared: “the infirmary is totally unfit and a disgrace to the Establishment.”

A new infirmary was built the following year but by 1891, after another damning Poor Law Board report, the Guildford Board of Guardians built the new 170-bed Guildford Infirmary, the forerunner of St. Luke’s Hospital, which opened in 1896.

During World War I, the infirmary and most of the remaining workhouse buildings were taken over by the military. The Guildford War Hospital treated 7,680 mainly British, Australian and Canadian soldiers between 1916 and 1919.

In 1929 The Local Government Act passed management of the infirmary to Surrey County Council (SCC.) Union Lane had been renamed Warren Road and Guildford Infirmary became known as Warren Road Hospital. By now there were 190 beds, including five maternity, mainly for unmarried mothers.

In 1938 there were proposals to build a large modern hospital on the site.As Warren Road prepared for another war, these plans were suspended.
WWII
The London hospitals were organised to meet the threat of bombing and the Warren Road site was incorporated into Sector 8 of the Emergency Medical Services, under St. Thomas’ Hospital. In addition to providing general hospital care for civilians, Warren Road treated military cases, including hundreds of casualties from Dunkirk and the D-Day landings.

In 1939 Warren Road Hospital was provided with a military style ‘hutted hospital’, built by Canadian soldiers. A group of London teaching hospitals used this new annexe to set up a temporary Radiotherapy Unit.

World War II brought about significant changes, with doctors and nurses coming down from St. Thomas’ and other London teaching hospitals. For many of them it was their first experience of working in hospitals where conditions and standards of care left much to be desired. This and the over-estimation of beds needed during the war helped pave the way for the NHS.

In 1945, the association with the old workhouse infirmary ceased, in name at least, when Warren Road Hospital became St. Luke’s Hospital. SCC renamed the hospital after Addison Road church of St Luke’s, (Luke being the Patron Saint of Physicians.)

In 1948 the hospital was incorporated into the National Health Service, which had just been established under the National Assistance Act of 1947. Following Clinical Union with Guildford’s Royal Surrey County Hospital (RSCH) Farnham Road in 1952, St. Luke’s expanded and specialised. The stigma of being a former workhouse hospital began to disappear.

During the late 1950s and 1960s, St. Luke’s expansion continued. The Nurses’ Preliminary Training School was built in 1956 and radiographers, operating department practitioners and midwives were all trained on site.

Dr R B McMillan MD, FRCP(E) was the Superintendent Physician. His foresight and organisational ability guided the hospital through this period. The new McMillan Day Hospital was named in his honour. Matron Brigit Coyle was another key figure and Coyle Hall was named after her.

In 1963 the Betatron Cancer Appeal Trust began fundraising to buy an electron therapy unit for cancer treatment, the first of its type in the UK. Hospital staff, with the actress Florence Desmond, the hospital secretary Mr Frank Cogdell, Mr Wingrave-Clarke and the League of Friends worked together to raise over £150,000. The Betatron was installed in 1967 and remained in service for 24 years.

By January 1980 the policy of centralising services in one Guildford hospital was well under way. In the first phase, inpatient services in general medicine, general surgery and paediatrics were transferred from St Luke’s. This marked the end of St. Luke’s as a general hospital.

St. Luke’s still provided a wide range of outpatients services and remained particularly busy as it housed the Departments of Rheumatology and Rehabilitation, Obstetrics and Gynaecology as well as an enlarged Geriatric Department and of course, the important Regional Radiotherapy and Oncology Centre. The Diagnostic Radiology, Physiotherapy and Occupational therapy departments continued their work on-site, along with the Public Health Laboratory and the Medical Photography and Illustration department.

The first Laser Laparoscopy in the United Kingdom was performed at St Luke’s Hospital in
October 1982 by Consultant Obstetrician and Gynaecologist Dr Christopher Sutton and his team led
by Sister Annie Parker and her nurses, with technical support from Dougie Bathie.

All the funding for a new Colposcopy clinic was raised by the ‘Guildford Raise a Laser’ charity
appeal, set up and run by St Luke’s staff.

In 1985, the Obstetric Department was improved and expanded to accommodate the Haslemere and
District Maternity Unit. In 1990, Nurse and Midwifery training also increased to serve three Health
Districts with the Frances Harrison College of Healthcare.

The site at Warren Road was always earmarked for closure. In 1991 the older main building of the hospital was closed and the Inpatient and Outpatient departments transferred to the Royal Surrey County Hospital. On April 1st 1991, St. Luke’s Hospital joined with the RSCH to form a jointly self-governing Trust within the National Health Service. Departments continued to be transferred away from the site.

The last department to leave was Radiotherapy in November 1996.
The site was then sold to make way for the 257 homes in St. Luke’s Park and St. Luke’s Square.